well, it’s only fair, despite his legendary self-diefication, to include him in comparison/collusion with the previous posts on avant-garde 20th century ‘classical’ music, isn’t it? there was something unfortunately, hubristic about his drive. unfortunately, i don’t have his collection of theoretical writings with me here in merida, otherwise, i’d quote from them. they are quite brilliant, and represent perhaps the 3rd or perhaps 4th of the coeval threads extant during the formative period of the 50s. cage vs boulez vs stockhausen vs, as the 4th thread, brown. for those who are wondering, minimalism came later.

however, pauline oliveros’s work, Sound Patterns, 1961, predated some of KS’s compositional techniques, winning her the Gaudeamus International Composers Award in 1962, and rightly so. oliveros often improvised with the Expanded Instrument System, an electronic signal processing system she designed, in her performances and recordings. she was asked to compose the music of one of cunningham’s central work, Canfield, 1969, the choreography of which was based on using for its chance operations a particular form of the card game of solitaire invented by one John Canfield. The premiere of Canfield took place in Tesla’s hometown in the then Yugoslavia, so oliveros entitled her composition: ‘In Memoriam Kikola Tesla, Cosmic Engineer’. [not available on youtube] Carolyn Brown, in her extraordinary 600 page account, Chance and Circumstances: twenty years with cage and cunningham,  describes oliveros’s work thusly:

[her score] consisted of three pages of instructions for the musicians. Tesla once – so the story goes – adjusted an oscillator to the resonance of his studio and nearly brought the building down. In Canfield, the musicians’ ultimate task was to discover the resonant frequency of the building in which the dance was performed but not to go so far as to bring the building down… They had a series of steps to follow, including describing – in an immediate and personal way, via walkie-talkies and the public-address system – the actual performance of space, comparing it to other spaces; recording the conversation and the environment as they explored the theater, including backstage, the basement, the lobby; and finally playing back the accumulated reportage, plus the accumulated sound material along with the oscillator-generated resonant-frequency sounds.

[Brown later in her book describes the typical audience response to this musical work – it was typically mayhem…  but cage as music director, and in sync with cunningham, never gave in to audience responses and always remained faithful to oliveros’ work.]

so while the following works are not her In Memoriam, they fairly represent the type of work she was doing at that time. 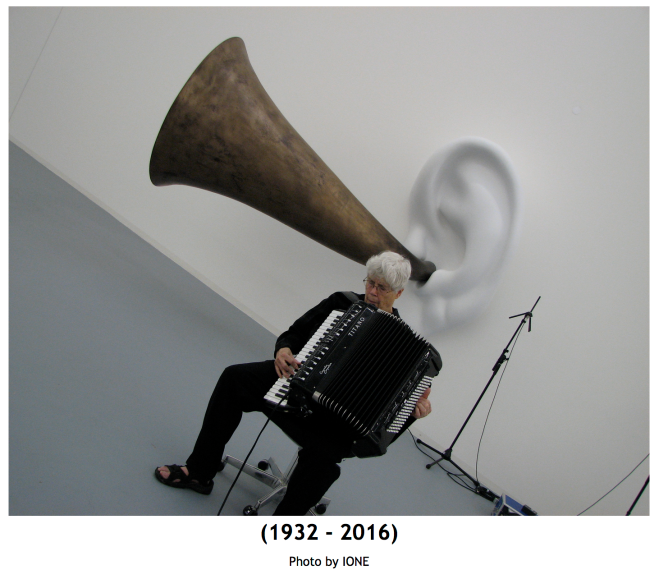