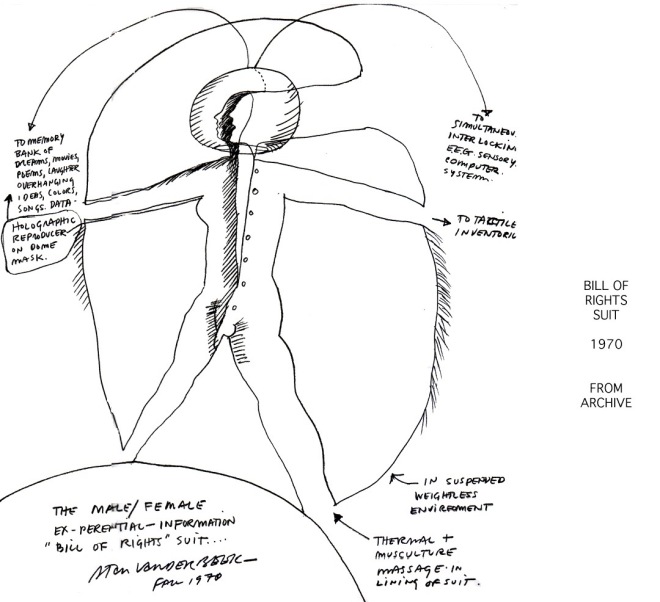 The above epiikon therefore insists, figuratively and urgently, on the need for a radical re-constitution of technoculture by means of a double articulation – a hermaphroditic information-suit must also be a “Bill of Rights” suit. He understood that new technologies must be paired with new politics in order for art and life to be justly and democratically served beyond the new sociopolitical frontiers he recognized were being put systemically in place during the 1960’s and 1970’s. This view, found throughout both writings and films, has been corroborated in its most damning terms by British social historian, Eric Hobsbawm. He has called the “short twentieth century [1914-1991], the age of massacre.” Hobsbawm is relevant here for his diagnosis of the radical transformation of the social psychology of humanity itself: the brutality of total war, he claims, leads inexorably to the brutality of politics, considered until then as the enlightenment “art” of social equality. His history of extremes determines that this brutalist politics was the direct consequence of the technological necessities of the Thirty Year War (WW I and II). It put in place the vast bureaucratic systems necessary to defeat fascism and effectively, as many have commented, simultaneously defeated democracy. Hobsbawm diagnoses the moment when a broad ethical normativity was lost; mechanization did indeed take command on a global scale that put politics and the whole of mankind, on a vast, militaristic, bureaucratic footing. It became the global, regulatory principle of society. [i] What we must add to Hobsbawm’s analysis, is that the industrial-military-complex was, at the moment Vanderbeek emerged, assuming a new form, reconstituting its mechanistic pouvoir-savoir as a telecom-military-complex. It is Hobsbaum’s pairing of the problem of ethics with the problem of cybernetics that I want to stress here, as the axes that determined Vanderbeeks’s historical vantage, and is one of the most crucial sources of his political and aesthetic orientations. (He turned 18 in January of 1945.) No other artist of the period comprehended and attempted to struggle with this context, as did Vanderbeek.

By the late 1960’s, he had already anticipated the impacts of the evanescing space between “experience” and “information,” between their gendered interpretations, and clearly understood the implications this had for the re-constitution of both social thought, and the social contract.[ii] However, he could not put his faith in the social movements in the US. His skepticism in this regard aligns him with Abbie Hoffman, Bob Dylon and Theodore Adorno, each of whom expressed, in very different ways, their alienation from the activist political strategies of the time. Vanderbeek felt that the efforts of the SDS and the activist video collectives were both too narrowly engaged in social terms, or what comes to be the same thing, too poorly organized, naïve, and inexperienced. Just as he took McLuhan as one point of critical resistance, social movements were another.

Ban-the-bomb types, peaceniks, hippies, flower children and pacifists represent the fist mass stirrings of the psychosocial movement away from the heritage of the past…. On the campuses at the moment, The Boston Tea Party is taking place. The real revolution will soon begin in earnest.[iii]

[ii] This is reflected in the titles of many of his works such as, “When in the Course of,” “O Say Can You See O,” “The Birth of the Flag,” all of which take as their theme major symbols of the democratic social contract. Vanderbeek’s many expressions of urgency about social conditions should be understood in this context, as part of the revolutionary movement of the global spread of Pensée 68. For one historical reference for the certitude that the period, 1968-1972, should be interpreted as effectively revolutionary, even if short lived, see Immanuel Wallerstein, “The Curve of American Power,” New Left Review 40, July/August 2006.

[iii] “How Can We Predict the Present Much Less the Future,” unpublished script for “Violence Sonata,” simulcast extravaganza, WGBH, Boston, January 12, 1970. I am beholden to Gerry O’Grady for supplying me with this document, among many, many others. Hereafter cited as GOG archive.

Foucault gave year long lecture series entitled: Les Anormaus: Cours au College de France (1974-5); trans. Graham Burchell as Abnormal: Lectures at the College de France 1974-5, London: Verso, 2003] The last lecture of that series suggested that his next course would be called: ‘Society Must Be Defended’. Today, it’s clear that society has NOT been defended, as exemplified by the rise to power of an extreme far right through Europe, the UK, and of course in the US, where Trump and Co are now at the helm of disassembling, ‘deconstructing’ in Bannons words, the regulatory state.

I won’t discuss here Foucault’s well know essay, ‘Society Must Be Defended’, but only cite Stuart Elden’s summary of some the points made in his lectures on the Abnormal.

… the first two lectures [of Abnormal] discuss power relations in some detail and oppose models of understanding power on the basis of possessive right and the productive relations (liberal and Marxist), to those that seek to understand it on the basis of repression (Hegel, Freud, and Reich are cited), and models based on war. Carl von Clausewitz’s famous dictum is quoted, and then reversed – ‘politics is war pursued by other means’. Foucault’s focus for the courses is, therefore, war. He wants to examine how the clash of forces, or the question of struggle, is the ‘foundation of civil society, at the same time the principle and the motor of the exercise of political power… where power has the role of defending society’… He wants to examine ‘the theory of war as an historical principle of the function of power, around the problem of race, since it is racial binarism that led – for the first time in the West – to the possibility of analysing political power as war’. The historical struggle between races, and the struggle between classes that follows it, are ‘the two grand schemes by which we ccan map the phenonmena of war and the relations of force in the interior of political society’ [‘Il faut defendre la society’: Cours au College de France (1975-7); trans. David Morely as ‘Soceity Must Be Defended’, London: Allen Lane, 2003.

Well, those readers of this blog not equipped with the specialized vocabulary of philosophy, need not think they don’t understand either Elden’s summary or Foucault’s comments embedded in it. They need only read newspapers like the Guardian, or even the New York Times, of Amy Goodman’s brilliant TV program, Democracy Now, to comprehend what Foucault is about here, in Elden’s summary. T-rump’s rise is all about race, undoing everything with genuine vengeance, everything the Obama administration attempted to achieve; the rise of white supremacy in the US and across the EU, and to site only two examples, the rise of the ‘defenders of society’ – Black Lives Matter, and, the wide variety of organizations defending immigrant rights. The list could go on of course, and would include Common Cause currently helmed by former Clinton Labor secretary, economist Robert Reich, the rise of high schools against the NRA after the recent massacre in Florida, the Electronic Frontier Foundation defending telecom/internet rights, and in popular terms, even the block buster film, Black Panther.

for debate about the later see:

more on war: from vanderbeek to hobsbaum to foucault to black panther