We need a new term for such an agency without agent. Gevirtz has given us a profound image in which to locate it; giving voice with the polygenetic middle tongue so that we can take the forked roads between noise and meaning, between listening and speaking, between giving voice and calling, in order to complete the community of the geno-voice. For her, the model derives from the “the virtual space of all the tele-technosciences, in the general dis-location to which our time is destined…”, as Derrida has described the event that governs communication today. Remember that significance doesn’t necessarily imply communication of linguistic meaning; that geno-songs and geno-voices aim to destabilize, to dislocate meaning in the networks of co-interpolation. What I will next demonstrate is that giving voice to something in the tele-technoscientific virtual space of communication today takes the form, as Gevirtz’s poetry brilliantly models, of broadcast. As she puts it in a poem entitled, “Prothesis:”

The voice speaks to its own mouth

and also from a speech external.

American poet and performance artist, David Antin, has developed his work with voice in the medium he polemically and with deliberate understatement calls simply, talk. Antin does not write; he speaks improvisationally before live and radio audiences, records and then transcribes his talk verbatim;

these talk transcriptions are then arranged on the page free of the formalities of proper written conventions such as punctuation and standardized paragraphing and sentence structure, making use of elliptical spaces between talk-fragments, then published as texts. As with nation language poetry, the immanence of the occasion of his talk performances is fundamental. 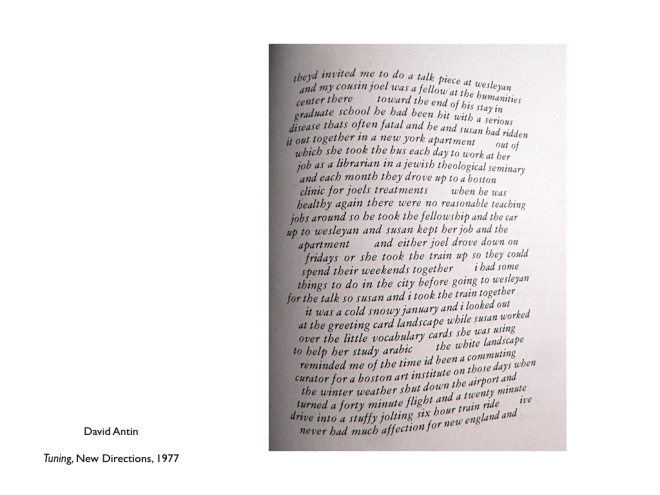 Each published talk is preceded with brief introductory written texts that describe the circumstances of each talk, in a voice that is as direct and familiar as the talk-texts. These introductions are polysemic in that they reflect on the political, personal, institutional, social, significance of the talk mise en scène. Their function is to draw the reader, as precisely and evocatively as possible, into the occasion’s immanence, and are analogous to Brathwaite’s notion of total expression; they historicize, locate, conjure up a past-present moment.

In 1977 he performed a talk entitled, Tuning, which may be thought of as his aesthetic manifesto. Radio broadcasting is clearly one of his intended paradigmatic registers, as in the phrase, tuning the radio; but the term also suggests the act of tuning a musical instrument, and the idiomatic expression, to tune in or out. We should also understand the terms as signifying song, as in the colloquial expression, tune. But as we will see in the following passage, his intent is to make an alliance with everyday practices of non-narrative, informal, wandering conversation as at a dinner table. He is resolutely not a storyteller; we might think of him as pursing the forked paths between a radio or TV commentator and an essayist like Montaigne. His overall intent is, to use an awful neologism, to de-literature-ize by reinforcing in every way possible, the literal network of co-interpolating associations that swirl around a matrix of related ideas that spontaneously emerge in the presencing act of talking. Antin’s method is the poetic equivalent of jazz improvisation, and each talk piece is a consummate example of a geno-song, performed rigorously in a geno-voice.

Antin begins to tune the middle tongue, to tune into the forked zone of the antinomy, exogenous/endogenous; he ‘calls’ his talk into existence as talk and immediately tunes his listeners exogenously to be complicit in the freedom from expectation, and endogenously to another antinomy – the personal, contradictory zone of generosity versus “self”-indulgence. He immediately creates a dialog about ethics, drawing speaker and listener onto the same forked path, while putting them in the explorer’s frame of mind, the erotic frame of wanting to know, making them curious and capably participatory through the ‘freedom of expectation” from having to know anything at all. He suspends meaning, suggesting that ‘communication’ is necessarily a negotiation and never certain or resolved because it requires consensus. His first spoken words are ones of initiation to an absolute freedom to imagine that is the fundamental principle of revolution.

Antin’s politics of tuning is similar to Barthes’ grain of the voice; it’s aims is to produce, as suggested above, a collective resistance to the liberal humanist ‘voice’ that atomizes the social through its infinite, repetitive broadcast of bankrupt subjectivist fantasies, which can never be generous, and only ever “self”-indulgent. Tuning is, therefore, a tuning to collective listening/speaking of polygenetic voices, to giving that amalgam a collective chance. An assessment that “seems only fair.” Antin’s tune is one of ethical, collective judgment that will become a precedent ‘because’ he fiddles with his tape recorder. Talk becomes the preeminent ‘record’ of urgency because it’s immanent, and a demand for judgments that must be made now, outside the hermetic closet that has been literature, ‘for him,” and thus for “us” because we listen to his call and are thus made complicit in what ‘we’ all desperately need to address. Listeners will be taken seriously because they are witnesses to a polygenetic vocal event to which they have been called to participate and judge. And because they listen, they are ethically responsible. Antin’s talks literally produce extra-legal courtrooms in which listener/responder voices will be heard, judged, and acted upon.

As they can be because:

The form, cadence, the “shapes of intonation,” as Brathwaite put it, of these lines derive, in Antin’s case, from Stein, also an inveterate though misunderstood non-modernist populist, and are opposed to Joyce, whom Antin despised for his aspiration to ‘great’ literature. Antin’s goal has been to produce “a post napoleonic commitment to producing an amazingly important object      Balzac say”   His aim has been to free our voices from a double dominance through listening to talk; from the dominance of normalizing pheno-songs on the one hand, and on the other, from communications of reductive meaning, between singers and listeners. His appeal is to “some sense of urgency out there     a passing police car           they     have an audience   they have an audience and a need          and they may respond to it badly                       but they have their sense of urgency”      He suppressed perhaps saying, ‘at least.’

Antin recognized that even policing has its libratory potential. In this vein, we could of course refer to Brecht’s model for a Marxist dramatic literature; the impossibility of several witnesses reporting a car crash in the same way. But that model, with its emphasis on sight, would undermine Antin’s emphasis on the siren, the sound, that calls us to urgency of what we do not yet know, but could; not to the unknowable event itself, which is just that – incomprehensible. Sight is overrated; sound is more singular and so a more reliable form of evidence. So talk is far more believable than writing because ‘we’ can experience it collectively and simultaneously, and agree or not, on what the voice says. Antin’s method is to mediate these disparate ethical calls.

history of the voice 3: gevirtz and david antin