tell us what you see on the wall

what i see on the wall… at first sight, visually, the artist’s transformation through compositional inclusion of the facade’s areas of fallen plaster. whereby, he’s commented on the cycles of birth and death…. he’s revalued ‘decay’ as a positive and troubling force/event/element. and emphasized the fact that there is NO guarantee that this corn born child will survive. he’s composed the broken plaster areas into a shape that is both a cartoon-like thought bubble, and the typographical symbol of a question mark. which door will the future walk through? this artwork is not a commodity. to those who can read it’s hidden messages, it’s a call to consider that this historical moment hangs by a thread between life and death. the near future of the entire planet is unquestionably in doubt. is there any doubt that this corn-born-child is entering a future, dessicated hell?

….the reason why I am asking is because I think that agreeing to what you say is easy and the common view of half of the people in the US, Europe, Turkey. However it seems to me that it is not Trump and his poor voters or the disillusion with the EU bureaucracy or the many other identity crises that surround us, that make our problem. They are the effect not the cause. We have lost our ability to see and are turning blind, day by day.

Most profoundly we lost our ability to see into the future. To have lost sight of what was once described in an understandable way, a common goal and a better world.  When every form of ideology was disregarded by the misconduct of Marx’s philosophy under the political dictatorship of the USSR and art turned with Andy Warhol on nothing more than the description of society, we gradually lost what was in every painting before the Second World War: a search for knowledge for the salvation of humanity.

agreed in part, with your first 2 sentences. though not sure i understand what you’re getting at with the third sentence above.

You can see those paintings in every museum of the world but can you understand them as such?  yes and no

How can we learn to see again? see below

We need to show people how to see the world a new and move from simple observations to views of the world and believe systems. well, who shows what to whom? perhaps this artist is showing ‘us’ something ‘we’ need to learn to recognize…

I want to know how we can extend creative views of our future?  – whose future?

So please  tell us what you see. Is it a continuation of the great Mexican tradition of painting your political believe on the wall, or is it like our fashionable street art, which has now been put under conservation order by British Heritage, to eliminated any visual, political possibility. see the following:

what you’re seeing is a typical decaying yet historically significant building two blocks from where i’m living. you can tell by the pediment at the top, the door frame, and the decently preserved wood door. to preserve a wood door in the land of termites is not trivial.

this young artist of course knows about ‘graffiti’, his medium is spay paint, but he’s obviously not worried about being busted by cops… he’s working solo, not with a crew to get the job done as fast a possible. he brings a large ladder with him, sets his paints out on the pavement in an organized fashion, and enjoys the fact that some guy from the hood watches him. and the guy from the hood thoroughly loves what he sees.

what i see is this: an artist who knows his ‘canvass’ – an old stone/stucco covered building on the corner of 36/65 that faces a lot of traffic, that is likely but not necessarily uninhabited, that has a form and color that he knows will compliment his very sophisticated color palette/colour theory. he’ chooses buildings, so i surmise, that have partially deteriorated facades, so he can include that in his composition. he’s very thoughtful, so he’s studied this specific building for awhile. and designed his painting specifically for this facade. or maybe he’s very good at improve. but my guess is that he’s planned this for awhile, at least partly, because of how intelligently he has used the facade compositionally. i watched him for a bit, and he never hesitated about what he needed to do next. he never stepped back to check it out, contemplate what might be good to do next. no, he just went about it systematically, every spayed surface by sprayed surface, very quickly and efficiently, but without hurry. someone may be paying him to do the job. but that seems unlikely, but not impossible. 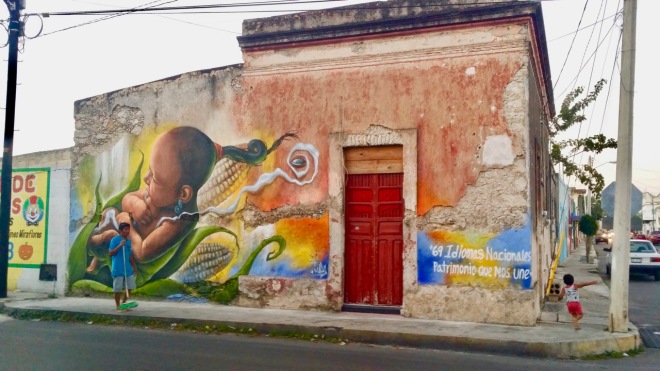 as for the content of the image:  a child being born sucking it’s thumb, with earring, and well tasseled poney tail, from an ear of corn, that’s a reference to Popol Vuh, the mayan  oral, ‘religious’/cultural/mythological traditional that the mayan race was born from ears of corn. without knowing what the artist will paint next, i can’t say how he plans to interpret the myth further. i’ll let you now. but aesthetically, he’s working in the tradition, knowingly or not, of the mexican muralists. then again, rivera and the like, took their aesthetic mural designs from exactly a ‘naive’ artist like this… so this aritst probably knows nothing about rivera and the mexican modernists.

i  will keep you posted.

update: unedited, so sorry for typos..

pictured above is the proud owner/occupant of the building, who has just finished sweeping the sidewalk. and his young daughter running around the corner. not pictured is the contact the owner and i had. he’s so pleased and happy with this contribution to the National Patrimony, specifically mayan in this case, exhibited on his house.

this is in a poor neighborhood where i’m the only gringo for at least a 2 mile radius. so i don’t think it’s appropriate to judge this work by euro-north-american high art standards. and definitely not by ‘aesthetic’ criteria of any sort, least that of modernist avant-gardism. while this artist is obviously influenced by street art, he probably has no idea who banksy is. he may. but even if he does, he wouldn’t take him as any kind of inspiration. this is purely a form of ‘indigenous’ art, mayan art, embedded in a local fight for self-respect, ‘idigiomas nacionales’ – indigenous nationalism and patrimony. and while in this era, that might smack of white nationalisms… there is no heil hitler salutes intended. on the contrary, if this is ‘nationalist’ in any way at all, it’s meant to speak to the patrimony of a decimated and oppressed indigenous and discriminated against subclass of people, the ‘yucatecans’, who are identical to the discriminated against societies of north american native americans. and, to be ‘nationalist’, has no meaning at all in mayan or any other indigenous societies because the concept of the ‘state’ does not exist. the ‘audience’ this artist wants to reach, is that of his own oppressed community of native mayans. even if he’s aware of the art history of modernity, he doesn’t give a shit about it. of if he does, he wants to resist and subvert it. yet, and yet, he’s learned from it, ironically perhaps, aesthetically… thus my previous comments about his attention to composition, color, the site specificness of the particular building he’s chosen to work with. and, it can be said that his medium, spray paint, is used in the tradition of the great mexican muralists, who because they allied themselves with communism, ascribed to the style of a popular art meant to teach and communicate ‘social values’ and traditions = ‘social realism’. full of figuration and symbolism that can be visually ‘read’. visually read by those who are ‘illiterate’ in terms of the elitist codes of modernist aestheticism…. not only illiterate linguistically speaking, in terms of writing – many ‘illiterates’ are multilingual on the level of speaking. but, illiterate in terms of being a ‘member’ a globalized modernity. indigenous people around the globe are, specifically, the outcasts of modernity, those who have been not only abandoned by it, but brutally and intentionally oppressed and eliminated, by it. just look at what happens to the indigenous peoples in the brazilian, ecuadorian, and peruvian amazon, where the concept of liberal ‘human rights’ is unknown, has no basis in constitutional law, or, when it does as in those same countries that have what is known as ‘multinational constitutions’, is entirely ignored because the power elite are above all law and do as they please to enrich themselves no matter the loss of life, daily and mortal, that that may entail.

i’ve traveled and lived for long periods of time in several places in latin american over many years. including brazil, ecuador, peru, bolivia and mexico. i have a substantial amount of first hand knowledge of the internal ‘racism’ in latin america. and, paradoxically, the utter lack of it. that would be another post entirely. just to say: this particular work that uses spay paint to achieve a kind of symbolic social realism while borrowing in some way from the aesthetic canons of public art site specificity in order to reach a very specific, local [neighborhood level] audience, is done brilliantly in the context of this bario or colonia in merida.

so, it’s not a matter of what to ‘see’. it’s a matter of what i’m trying to interpret and comprehend about the art practice in this very specific social context, where the artist is highly aware of his own highly specific social context. this is brilliant conceptual art, in effect. it’s just that this artist is using the visual languages he has available to him, no differently than cindy sherman or barbara krueger, or the now ‘debunked’ work of the US ‘native american’, jimmy durham…

the age old question: what is the purpose of art? for whom? by what means? according to whom? and where?