Recorded in the year of his death, Interstellar Space—a frenetic suite of free jazz duets with drummer Rashied Ali—didn’t appear until 1974. The album has since received widespread critical acclaim, and stands, Graham argues, as “Coltrane’s most influential record, its echoes still heard today in everything from electronic music to some of the world’s biggest hip hop acts.”

Should we pursue this line of thinking, however, we might have to grant that the posthumous Interstellar Space and its follow-up Stellar Regions—compiled from tapes Alice Coltrane discovered in 1994—are the result of Coltrane’s final musical apotheosis and thus can sound nigh-incomprehensible to most mere mortals. Interstellar Space “is a musicians’ album, for sure,” Graham admits, and an album for those fully open to the unknown: “the dissonance and enharmonic experimentation… is otherworldly.”

On the other side of the epistemological spectrum, we have physicist and sax player Stephon Alexander, who writes in his book The Jazz of Physics that “the same geometric principle that motivated Einstein’s theory was reflected in Coltrane’s diagram.” Likewise, saxophonist Roel Hollander sees in the tone circle a number of mathematical principles. But, remaining true to Coltrane’s synthesis of spirituality and science, he also reads its geometry according to sacred symbolism.

The circle contains Coltrane’s musical experiments, yet cannot be explained by them; it hints at theoretical physics and the geometry of musical composition, while also making heavy allusion to mystical and religious symbolism. The musical relationships it constructs seem evident to those with a firm grasp of theory; yet its strange intricacies may be puzzled over forever. “Coltrane’s circle,” writes Faena Aleph, is a “mandala,” expressing “precisely what is, at once, both paradoxical and obvious.” Ultimately, Mwamba concludes in his series on the diagram, “it isn’t possible to say that Coltrane used the diagram at all; but exploring it in relation to what he was saying at the time has led to more understanding and appreciation of his music and life.”

The circle, that is, works like a key with which we might unlock some of the mysteries of Coltrane’s later compositions. But we may never fully grasp its true nature and purpose. Whatever they were, Coltrane never said. But he did believe, as he tells Frank Kofsky in the 1966 interview above, in music’s ability to contain all things, spiritual, physical, and otherwise. “Music,” he says, “being an expression of the human heart, or of the human being itself, does express just what is happening. The whole of human experience at that particular time is being expressed.” 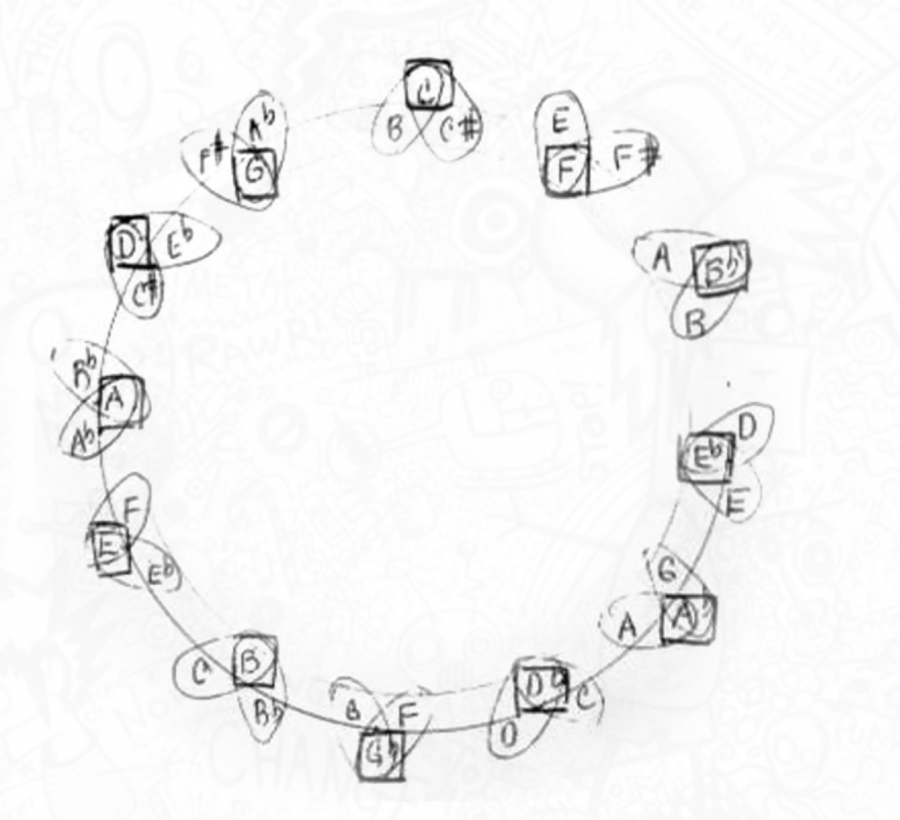 In a detailed exploration of the math in Coltrane’s music, Hollander writes, “all tonics of the chords used in ‘Giant Steps’ can be found back at the Circle of Fifths/Fourths within 2 of the 4 augmented triads within the octave.” Examining these interlocking shapes shows us a hexagram, or Star of David, with the third triad suggesting a three-dimensional figure, a “star tetrahedron,” adds Hollander, “also known as ‘Merkaba,” which means “light-spirit-body” and represents “the innermost law of the physical world.” Do we actually find such heavy mystical architecture in the Coltrane Circle?—a “’divine light vehicle’ allegedly used by ascended masters to connect with and reach those in tune with the higher realms, the spirit/body surrounded by counter-rotating fields of light (wheels within wheels)”?

As the occult/magical/Kabbalist associations within the circle increase—the numerology, divine geometry, etc.—we can begin to feel like Tarot readers, joining a collection of random symbolic systems together to produce the results we like best. “That the diagram has to do with something,” writes Mwamba, “is not in doubt: what it has to do with a particular song is unclear.” After four posts in which he dissects both versions of the circle and ponders over the pieces, Mwanda still cannot definitively decide. “To ‘have an answer,’” he writes, “is to directly interpret the diagram from your own viewpoint: there’s a chance that what you think is what John Coltrane thought, but there’s every chance that it is not what he thought.” There’s also the possibility no one can think what Coltrane thought.

http://www.openculture.com/2017/10/john-coltrane-draws-a-mysterious-diagram-illustrating-the-mathematical-mystical-qualities-of-music.html
for a possible interpretation of coltraine’s diagram, see: stephon alexander – the physics of jazz
https://www.youtube.com/watch?v=90bjRafoP0Q