There can be no doubt that Elon Musk’s Falcon Heavy liftoff success, today, is a first step for man into some new era. Just watch the following footage, before you read my following text:

What follows are a series of screen grabs of that footage, with a debordian commentary that will attempt to suss out the varieties of ‘integration’ it demonstrates. My analysis will be dispassionate; meaning, as is not often understood by non-fundamentalist, marxist analyses of culture, economy, art, society in general; that, while i will not refrain from criticism, i also will not refrain from praise. In a nutshell, such an approach is ‘dialectical’ to that degree; though not beholden to dialectic in any form. Dialectic is too simplistic, as Marx himself came to believe. Just as Heidegger rejected the analytic of Being and Time and turned to poeisis. Just as Nietzsche came to belief that the Apollonian vs the Dionysian was simplistic; and Freud came to believe that Eros vs Thanatos was simplistic. The human race it seems, is either far too complex for dialectical analysis, or, probably more accurately put, too simple. Humans follow very few instincts. Most of them are not very human at all. Most are entirely unconsciously corporeal, animalistic, if you will. Am ‘I’ alpha enough to chase out of my territory the larger than me feral tom cat who has invaded? Might “I”, an alpha woman, do the equivalent? Ok, i won’t pursue that loaded conundrum here, but i do want to raise it.

So, at the outset, let’s forego the cliche sort of interpretation that can only see the ‘phallic’ in a rocket. A rocket is not a cigar. A rocket is the result of a physics driven product design, determined in this case, by an enormous variety of physical determinants, that i won’t recount here because that is not the point of my commentary. But just to put things in perspective, I don’t know of anything more phallic than lipstick. In form, it’s inseparable from the form of a rocket, which women put to their lips daily, multiple times, daily. 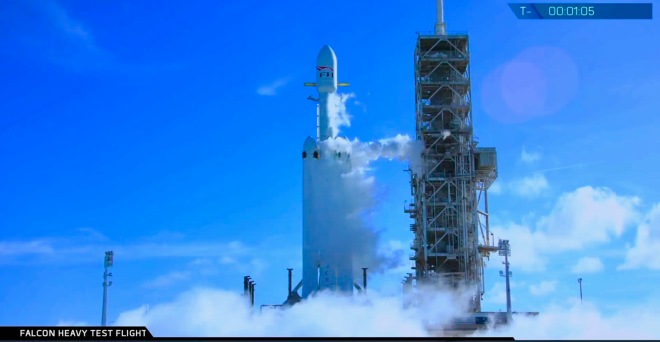 Now that we have cliche’s out of the way, let me summarize the engineering basics of today’s event.

The largest, most powerful rocket ever constructed, with a set of jet engines 3 times greater than than any previous design [27 engines vs 9], which was essentially an assemblage of 3 rockets, not only launched successfully, but each of the 3 rocket units self-guided themselves back to earth after launch and successfully, well, maybe except for one, we don’t know yet, and landed with extraordinary precision at the very centers of their landing pads.

the central [core] rocket that may or may not have successfully landed, was attempting to land on an autonomous ship landing pad in the Atlantic. SpaceX has successfully done that before. So if this one failed, it’s a minor problem.

10 seconds before launch of the Falcon Heavy, the event was entirely controlled by computers. 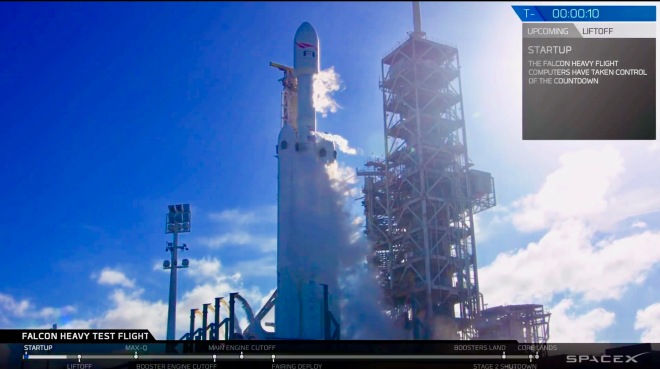 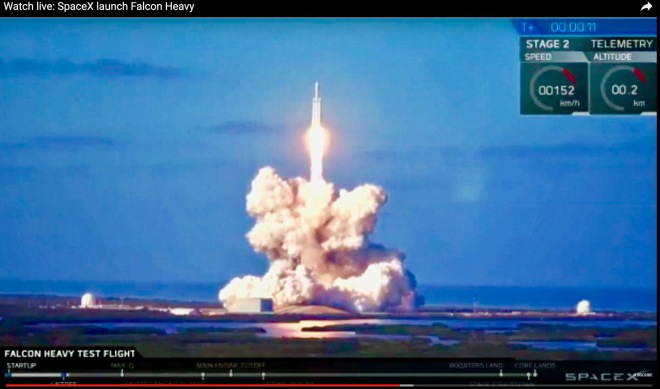 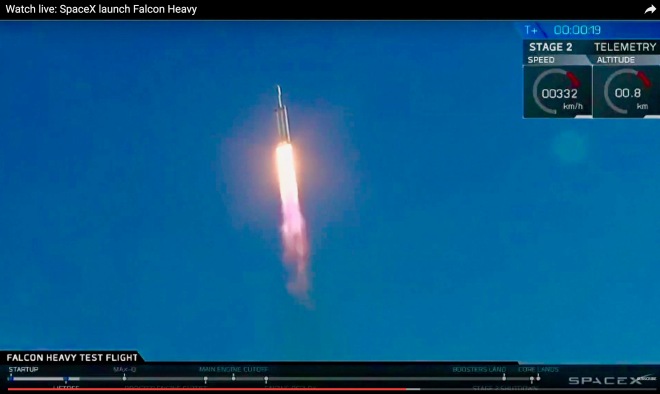 the shear technical bravado of this event, is the first of it’s kind since the Apollo program of the 1960s. Which signals something significant about the recycling of history, with difference of course. In the ‘old days’ of the cold war, landing on the moon was a ‘sign’ of power. While today it’s a pragmatic function = because it could lead to new resources to fuel capitalism = mining asteroids, the moon, actually colonizing mars, so also, a new form of colonization = which kim stanley robinson, in the guise of jamesonian marxism, has been an unwitting apologist for. so much for ‘hard scifi’. robinson is the cause of musk because the former gave the latter enough imagination to go for it. whereas, Dick, posed paranoia as defense against such hubris.

in terms of the integrated spectacle, what is most significant, is the audiovisual production of a ‘live’ event. and of course, there is nothing ‘live’ about it. the spectacle is, by techno-definition, a nonliving, constructed series of independent and non-contiguous events, collated, like all film and moving media of any kind, to appear as though it were ‘live’. don’t be fooled by the various forms of ‘countdown’, particularly by the running clock and timeline, which intends to obfuscate the fact of cut-cut-cut amalgamated sequences, indeed, a linear but discontinuous and therefore non-live sequence of the unfolding of the event. in fact, the visualization of the rocket launch, foregrounds the multiplicity of perspectives, defeating it’s other narrative of linarity. it demonstrates rather remarkably, just how impossible 1 point perspective is. but, the narrative of talking heads and other subterfuges, refused to acknowledge this disparity. 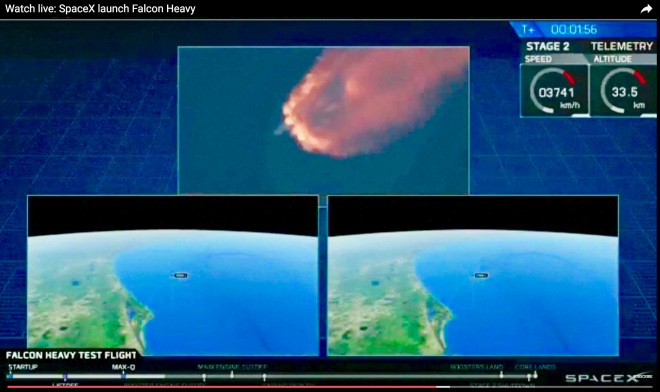 that said, we’re use to that, and this is no different, and an exciting and useful simulation. the sequence above is filmic and astonishing. it’s Phillip K. Dick actualized.

the base, crass, bottom line of this spectacle construction was a sales pitch: for tesla cars – the payload was a ‘cherry red tesla roadster’; for elon musk in general – full demonstration of his alpha techno-strength; for his company SpaceX; to the hipness and cool of his billionaire prowess; all to the tune of bowie’s starman, with the soporific message, ‘don’t panic’. 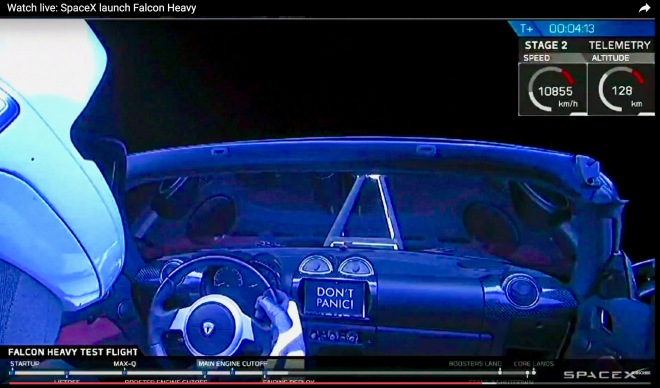 this event, it must be remembered, was two days after the other global mega-spectacle: the Superbowl, surely not an accident. winner or loser of that event, musk could rest assured that his event would partake of that euphoric, nationalist event. such is the substrate of the US nationalist unconscious, which with t-rump, is now awakening in its ugliest form. T-rump has committed to putting ‘americans’ on the moon again. without of course assessing the cost to the social health of the country. putting a man on the moon, again, is only a political goal for the economic elite to benefit themselves, through the support of the military and the corporate elite in general. such is the robinson-inspired, crude marxist, fantasy of ‘realism’.

thus, space exploration is allied with colonization, othering, scapegoating, defending the borders. with, supremacy, nationalist, white and the super-rich, like musk. we applaud musk’s virtuosic technological sublime, cheer for it, even as a fraction of the cost of a single rocket might house every homeless american. i happen to know that the total cost of developing the first functional space suit was 20 million USD in 1960 dollars…  I also happen to know that mid-way through the Apollo program, NASA suffered a defeat for funding in Congress because of such a comparative critique, and in response, the then NASA director was fired and replaced by an AD-Man, who developed NASA’s public relations campaigns that have been in effect ever since their budgetary defeat. so NASA is co-directed: by the AD-Man, and, by the head of research and technical direction of the agency. 2 heads are better than one, supposedly. so, why not three rockets rather than one?

well then… the integrated spectacle is now, as Debord could not have imagined, a so called ‘integration’ of ‘public’ and ‘private’ finance and development, of government-private partnerships, and down that precipitous slope, ‘democracy’, the fantastic illusion of it anyway, has slipped down with increasing acceleration and with T-rump, is nearing it’s bottom, but it hasn’t hit it yet. If 10 is the top of that slope, and 0 the bottom, i’d say were at 2 at best. this is the law of thousands of years of history – the decent to the bottom takes centuries if not millennia, and it often takes an equal time to rise again. As Benjamin once said, and i paraphrase: just because things have been bad for a thousand years doesn’t mean that things will get better anytime soon.

So, back to the integrated spectacle: what, in this Spectacle production has been integrated?

yes, that is a singular political construct = ideology = form of consciousness = default regulatory form of social control: = see harkaway’s Gnomon for a critique of how that plays out. [but be prepared for too much divigation]

yet what is the tax system, as has been said by many, but socialism for the rich? because it’s necessary to be blunt, it’s necessary to state the obvious – public money in the form of taxation has been radically shifted into the pockets of the wealthy, who don’t pay taxes, at the expense of those do pay taxes. which is essentially, the cause of american revolution against the british = taxation without representation. though, representation has never amounted to anything other than the control of the powerful over the powerless, though foucault would disagree, appropriately so = the ‘disempowered’ collude with their masters, and vice versa, in order to maintain some false sense of normalcy, the status quo. as reich put it: the oppressed desire their own oppression.

so, it all comes down to desire… control that, and you control everything. and that is the raison d’etre of advertising, and why billions and trillions are spent on it = google search engine. ‘search and ye shall find what you most desire’…

such is the insanity of this historical moment. and it is nothing less than insane. it’s okay to shit upstream of your water supply, now. not just okay: it’s insisted on. if you don’t shit in your own backyard and water supply, there is something wrong with you. and capitalism uses the entire earth, all it’s oceans, as its upstream water source, as its toilet. more: it’s willing to foul and infect and defile and pollute the well of all humanity. defecating in your most precious recourse, is now politically correct, and if you don’t agree, then you are subversive. and that ideological brace on the brain will not change anytime soon.

demonstration: just try to live a plastic-free life. then imagine going to mexico or india or china or bangladesh. plastic haunts the planet, it’s ubiquitous, and it’s destroying earth.

so, what choice do we have but to support musk’s efforts to get us off our plastic wrapped and impregnated and ocean clogged, planet?

there is one other, at least one other, aspect of today’s falcon heavy launch that needs critique:

p.k. dick achieved! but, what did they do, they sent asimov as part of their ‘human package’ to the aliens… and musk’s roadster… spectacle, not at its worst maybe, but pretty fucking cheesy. great way to represent the human race… how does that represent the 99%, not to mention the 90% of totally impoverished humans. musk’s roadster could not be more offensive as a ‘gift’ to the universe. and it will be up there for a billion years… perfect symbol of humanities hubris and willingness to pollute, even the universe at large. musk’s roadster is nothing but an alpha cat pissing on mars to mark his territory. ‘hey, i was ‘here’ first! so piss off. love, elon. elon has corroborated everything that is the worst possible aspect of technological innovation and capitalism.

alien 1; these earthlings write like shit!
alien 2: yeah, and they still travel by petrol and electric powered cars, how fucking primitive!
alien 3: shall we put them out of their misery? it would be an act of compassion.
alien 68: hold on a minute: i just got a whiff of a human who suggested rewriting that tired and cliched and pathetic falcon heavy broadcast. she/he, not clear, suggested substituting ethiopians for the generic foxnews-like presenters, and suggested that nick harkaway write the script. so, maybe we should hold off on the compassionate extermination plan, at least for a bit. maybe they are not all bad. 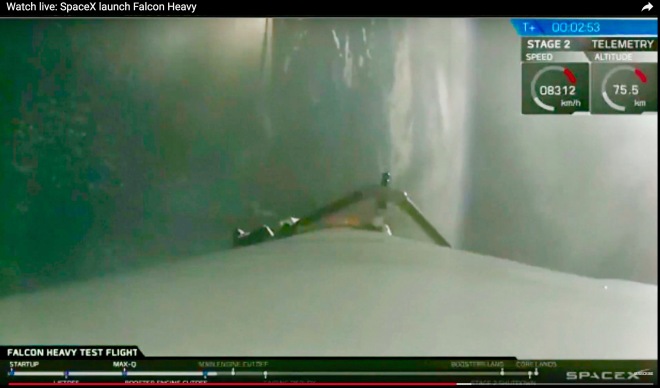