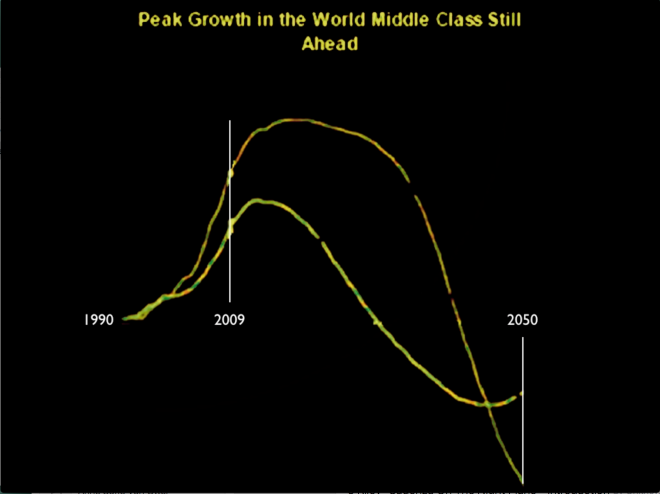 i shouldn’t have assumed that readers would understand this graph produced by goldman sachs. or, that it is actually a graph produced by that globally preeminent bank. it is. so, i’m attempting to make recompense for that now: originally it was used in a video called, failed states, by a radical group called, webcam automaton. and the images of the graph i’ve presented here are screen shots from their video. they altered it aesthetically as part of their overall presentation, and perhaps that was a bad choice. perhaps they aestheticized it and devalued its significance to make it less believable.

i interpreted it oppositely – that webcam automaton tried to make a cold graph developed by mathematicians at the service of the managerial CEO’s of GS, palatable enough to be viewed by a general audience, as an image. but perhaps i was too permissive. i probably assumed that anyone who took a look at the graph would understand how to read a graph. that ‘up’ means ‘increase’ and that ‘down’ means ‘decrease’. and that the horizontal line means history – from 1990 to 2050.

my second unacceptable assumption was that reader-viewers would read-see the title of the graph – ‘Peak Growth in the World Middle Class Still Ahead’ – and draw the obvious consequences. so i have to admit that i’m an arrogant son-of-bitch for making such assumptions, because i had enough education in my first year of high school to know how to read a graph, and falsely, and arrogantly, assumed everyone over the age of 15 could too. [btw: that was in the 70s and i came from the working class… so i’ve just assumed every working class kid like me could read a graph]

“What that practice has taught me fundamentally, is that I am “them.” I have the same capacity for judgement, stupidity, greed, hatred and rage as the people I rail against and consider “other.” peter coyote, see below

but since then, i’ve come slowly to recognize that others with phds, like myself, can’t read or see very much at all. and that what ‘we’ read/see is largely entirely meaningless. but not always entirely. so back to the graph, and particularly to the significance of it’s title: ‘Peak Growth in the World Middle Class Still Ahead’. Every single word in this title is both surprising, and horrifically political.