for some of my readers, it might come as a surprise that the US [‘America’ as it’s referred to in the UK and EU, though the central and south ‘Americans’ chaffe at that, and rightly so] – so it might come as a surprise that the US has a ‘longish’ [short by european standards] history of ‘landscape painting,’ that historically has been mostly regionalized. as in the Hudson River school of the 19th century, which tended toward enormity, canvasses of vast scale that dwarf the viewer in the view. but they are nothing like, for example, the german school of landscapes such as those of Caspar David Friedrich, [see the post below on painter alf loerh: ‘objective emotion: a painter’s intervention into the spectacle’] say, which were part of europe’s romantic movement that sought to overwhelm the ‘mere human’ by depicting nature as terrifyingly sublime. nor are they anything like the brilliant dutch paintings which in the then mercantilizing of the art market of the 18th century, drew their inspiration from everyday life and the domestication of natural forces – particularly wind and ocean. nor are they like the cloudscapes of someone like either Turner or Constable in the UK; or, certainly not like those in France of the early modernizing moment as seen in Manet, Cezanne, or Seurat. so, to cast a wider net, if a historical comparison is useful, the landscape paintings of linda flemming’s husband might be closer, in spirit and intent, to the landscape painting of east and south asia, of india, nepal, korea, china and japan, for example.

yet… there are many other allusions and influences in the work of linda flemming’s husband’s [LFH from here on] works that are in fact, deeply derived from the US context/environment. LFH, after all, studied with jack tworkov in the late 1960s.

what is so compelling about Untitled Landscape, other than it’s compositional and color brilliance, is it’s ‘imagistic’ allusions to: color field painting, landscape, and urban environments where black-and-yellow motifs suggest crosswalks, social control, and extreme caution. in retrospect, it is not difficult to make the claim that this particular work is a very important reflection on the political tensions in US of the late 60s, emblemized but the vertical line threatening to sever one twin peak from the other, asymmetrically of course.

This work is both cinematic, and is completely resistant to the moving image. Yet, it employs several forms of ‘perspective’ simultaneously common not only to modernist avant-garde cinema, and some painting, but to the history of mechanized photographic visuality – which allows for ‘trans-human’ perspectives – aerial, high altitude, geological cross-sections, zoom-in shots from great distances, as well as, closeup zoom-ins. karnak/carnac alludes not only to our present state of what nietzsche called our late eyptianism [the demise of an entire world epoch when the social fabric was destroyed by imperialism’s self-interested rapaciousness at the expense of everyone else], but to how our late egyptianism is reflected in, and perhaps resisted by, ‘desert’ landscapes – by the extraordinary beauty in places where people don’t live, in environments that are uninhabited, and where ‘nature’ carries on as it has for millions of years.

LFH’s work is, in this sense, the direct opposite, in terms of what it means to represent, of romanticism’s landscape traditions in Europe, or, in the US.

LFH’s work is voluminous… both in it’s aesthetic dimensions, and in it’s commitment to continuing entirely outside the recognition of the art market. 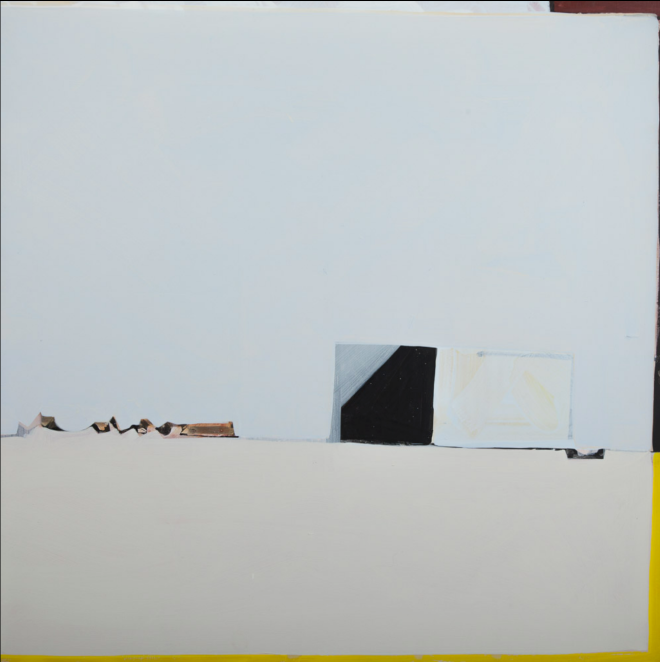 note: Benicia and the Bay Area generally, is on the flight path of the US military’s constant supply chain of flights to it’s wars in the middle east and everywhere… these planes fly overhead about every 10 minutes, mostly at night, but also, during the day. i’ve watched them and photographed them. but no photograph can capture what LFH has in the above painting.