Stettheimer’s set for Act I of the 1934 production of Stein’s “Four Saints in Three Acts.” Yale Collection of American Literature, Beinecke Rare Book and Manuscript Library. Photo by Harold Swahn.

Stein wrote Four Saints in Three Acts, in 1927. Later it was used as the text for an opera of the same title, performed with an all black cast in 1934 in several locations in the US. The music was written by Virgil Thompson, a dear friend of hers she met in Paris, who was little known at the time. Here is a very short excerpt:

The many reasons Stein has remained on the fringes of theoretical and aesthetic discourses may be resolved to a single one. To borrow a crucial concept from Bakhtin, the chronotopicity of her work is not ordered by metaphor or the narrative regimes of representation expected by modernist literature. Stein’s work in nothing less than a cataclysm for established literary practices, then as much as now. What do we call her works if neither prose nor poetry?  And what methods do we use to understand them? Assimilating her to contemporary idiom, they might be called audiovisual apparati operating on chronotopologies ordered, after 1913, by the spatializing, performative figures of “play,” “landscape,” and “geography,” that, to be navigated, require the temporalizing forensic attitudes of a detective. She used the analogy of a motor moving in a moving car to convey the relational movements of speaking and hearing simultaneously that her works embody. To this end, her works literally invent the punctuation, vocabulary, and grammar of a new linguistic calculus, predicated on a syntax of analytic rather than synthetic relations.  Through these efforts, Stein “constructs” a nonnarrative, nonrepresentational chronotopicity in order to correct the semiological damage to “becoming through the world,” the consequence of a naïve realism – naïve because of its reliance on substantives, on nouns and adjectives, on the description of objects, rather than on facilitating experience of felt (made, done, acted, performed) “movements” through relations performed in-on-with-within the “stream of thought.” To accomplish this task, she reinvents language in all its dimensions and uses. She also frees them of unidirectional diachrony, as she reserves the right to move through any spatio-temporal dimension in any direction. 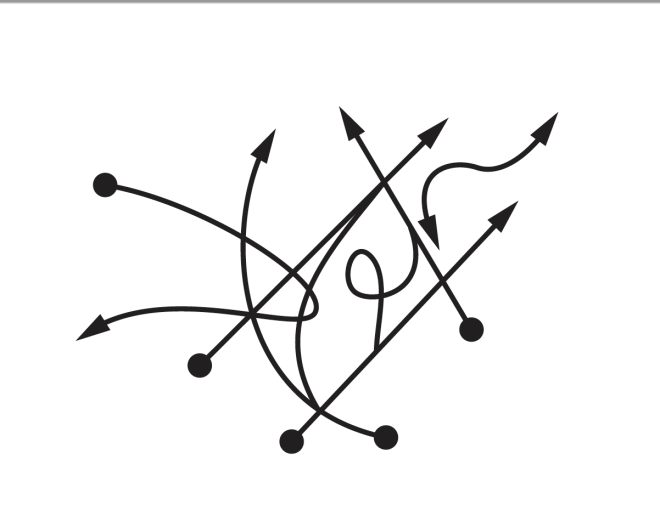 A ‘saint’ then, is a ‘being’ able to move through any spatio-temporal dimension in any direction. A ‘saint’ is therefore, a science fact-fictional being. In the music realm, a la Stein, Sun Ra of course comes to mind. The ‘theory’ of this blog then is in part determined by my analysis of Stein’s early work, Orta, or One Dancing, a portrait of Isadora Duncan: 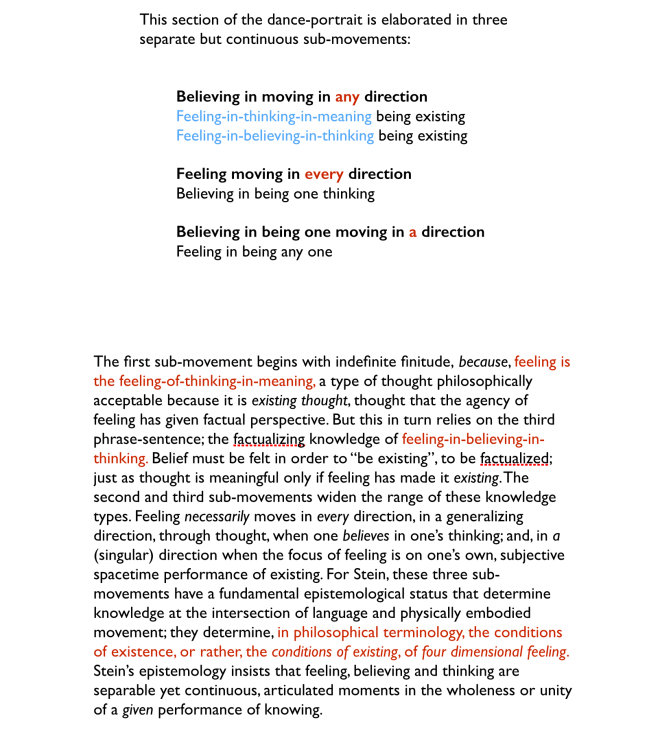 This said, ‘language’ itself is both a barrier and a possibility for ‘believing-feeling-in-moving in any direction:

Stein’s grammar and syntax are completely predicated upon this relationality between material world and material subjectivity as mediated by language. She constructs a language to embody “thought” in spacetime continua in which language “dissolves,” or “cross-fades,” coevally, in opposite directions: first toward language and “signification,” and secondly, toward its negation through an emphasis on its performative transitivity, to its re-embodiment and restoration of knowledge of the “vague” corporeal fringe. Her language is a language of, a language and, a language if, a language of but and by; it is a language on the move as much as a language of movement. It is a language of overtones that attempts to reduce the mediation of language to its diminishing, ever evanescing limit. It is a language of transitive consciousness, in which the transitivity moves is both directions. Her methodological moving through literature is a philosophical rejection of the dualism between epistemology and ontology. Stein’s Einesteineian epistemology emerges from her rejection of dualism in all of its manifestations, by refusing to act as though the mind and body were dichotomies, and thereby rejecting both as ‘centers.’

I think I’ll have to next, or soon, talk about the poetry of the contemporary American poet, Susan Gevirtz.

Gertrude Stein – one possible theory of this blog…