My comments so far [from a previous essay not included here in it’s entirety] have aimed to contextualize some of Roloff’s aesthetic and philosophical principles necessary to comprehend his work. To repeat what I’ve said above, his works constitute post-Enlightenment, aesthetic judgments of spacetime that collaborate with physio-chemical processes and interactions between natural and human systems, where the artwork becomes an autonomous, autopoetic object-event, and anthropomorphism, human action on the world, is viewed in anti-representational terms, destructive and entropic. Roloff inverts 19th century Romanticism that took ‘nature’ to be a transcendental, creative and sublime force; for him, the human-nature relationship is imminently, tragically, catastrophic. What I will continue to elaborate is how his work shifts from negation of the regime of representation explored in his photographic work, to landscape and architectural works in which spacetime imaginaries are raised to full four-dimensionality at a literalized planetary scale that constructs viewers as geologists and meterologists, as those with an uncommon perceptual imagination able to comprehend spacetime scales measured in such trans-human units as climate, millennia, and terranes.[i]

[i] Readers are alerted that the term “terrane” is a geological term distinct from its homonym, terrain. A terrane is an often very large fault-bounded area or region with a distinctive stratigraphy, structure, and geological history, sometimes referred to as a proto-continent.

A considerable part of Roloff’s art practice has been devoted to complex, large-scale public art projects. [see below] 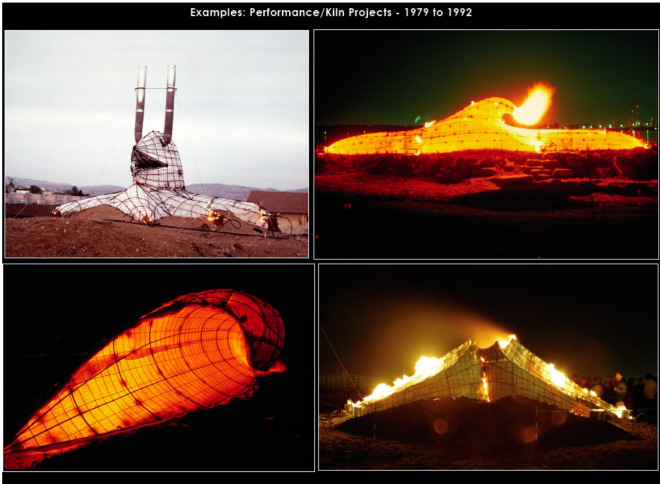 Literally entropic photography: from the Knight’s series, with oranges: [the acid of the oranges degrade the chemistry of the photograph over time, ultimately erasing the image]

If Lyotard’s Newman displaces the Romantic sublime from standing before nature ‘over there,’ to the act of painting itself as event, then the sublime has been brought out of nature and into the human sphere; though in its specifically atemporal, spatial dimension, and as a record (a witnessing) of the historical encounter between painter and the inexpressible. The elements of time Roloff engages are, in contrast, both the completed past event (the death of historical icons) and an indeterminately futurist one (the chemical catabolic reactions between photographic and organic materials). His work compresses the time of a cultural memory of medieval Europe, the Renaissance , and World War II, and some complex and unpredictable future moment when the entropic, chemical processes completely efface the photographic trace of a spatially fixed temporal moment.

Roloff’s photo-process works are simultaneously an object and an event. On the material level, the work is an event in which the ordered, negentropic photographic image is then chemically fused with the entropic, chemical process of oranges decaying. On the semiotic level, history and memory, (the figures of the knight, war ship, and Van Eyk paintings) as ephemeral textual episodes – oranges as symbols of the Golden Horde, as portals into mortality and beyond, as subatomic events, as the star systems that fuel life and which will eventually exhaust themselves – erode by the same material forces that generate them. Embodied signs empty themselves of rational meaning with the passage of time, as the sensory image is destroyed by catabolic, molecular events, and the art work is itself the frame within which aesthetic judgment is made. Time is that which runs out, not merely psychically, but materially; not just individually, but cosmically. These metabolically expressed ‘privations’ are concretized events happening as long as the work happens. By literally embodying time and entropic forces, the literalization of the negative moment, Roloff affirms an aesthetic judgment that assumes the form of negative expressivity.

But such an aesthetics has value only in the negative distance between the terms it sets in opposition, between space and time. This distance has collapsed in Roloff’s work. His aesthetic practice aims to erase the distinctions between a series of terms that each depend on a more fundamental one; between organic, physical processes and the human-as-autonomous; between indexicality and abstraction; between history and the present; between signifier and signified; between the synchronic and diachronic. Each of these dualisms is possible only in an Enlightenment regime of common, perceptual sense grounded in the false separation of space and time. How are we to comprehend that part of the ‘image’ where citric acid temporally unbinds the silver nitrate molecules and disorders the spatial indexicality of representation? What do the orange slices and their entropic chemical, image-destroying traces signify? What else but what they literally, factually are – metabolic breakdown, the something happening in time, which is the negation of representation itself? But happening to something else, the photographic images of the dying knight, the sinking ship, the inverted Renaissance elite. What Roloff is able to powerfully, literally express in a ‘work’ of art, is the ‘work’ of negation of an aesthetic that assumes that space and time are independent of each other. I emphasize the figure of ‘work’ here to suggest labour, production, the bringing of something into existence. The raw material of this labour is not simply citric acid and photographic paper, but the spatial image imprinted on it, and then chemically obliterated, in time. In Roloff’s ‘work,’ space and time reciprocally negate each other by abandoning their absolute self-sameness, and difference from the other, and their absolute independence. What comes to be positively expressed is an entirely other animal – the co-creative object-event of spacetime.

I’ll re-edit this post soon to include dates etc. the Night Ships are all made of clay and fired in a kiln.

Soon after these works, Roloff began to use the kiln itself as sculpture, rather than as a device in which to make works. 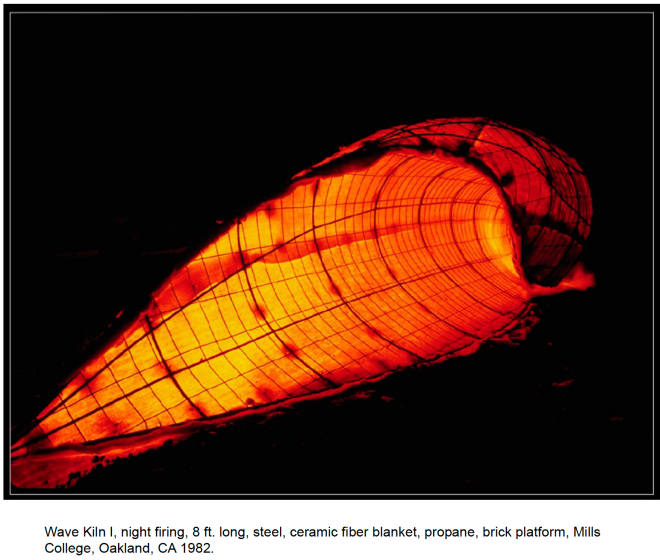