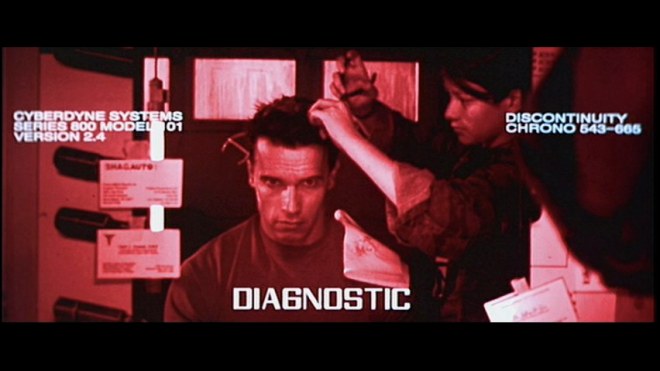 admittedly, at first glance, my filmic references are almost ancient history. the first film of the Terminator series came out in 1984, for example, but the fifth in the series, Terminator Genisys, came out only last year, 2015. Schwarzenegger has been around in cyborgian form for quite awhile. the history of the Matrix franchise is far more telescoped; the first installment came out in 1999 while the second two were both released in 2003. That happens to be the same year both T3 and Ang Lee’s Hulk came out. the Alien series unfolded over an 18 year period, between 1979 and 1997. Batman has seen three distinct temporal series; 1943 to 1966, 1989 to 1997, and most recently, 2005 to 2012. X-Men has so far been distributed over a 14 year period, from 2000 to 2014, with future installments scheduled through 2017. Two extensions of Avatar are in development. And there is speculation that Scott is planning a Bladerunner sequel. i won’t bore anyone with the genealogy of Star Wars, which it seems will be an infinite series.

my point here is that some historical forces unfold relatively slowly, are discontinuous, constructed over a long period interrupted by variable-length intervals. the reasons for this are not important here. it’s the effect that interests me. the serialization of blockbuster films are able to influence vast populations on a global scale, over multiple generations. Star Wars is indeed the most extreme example. such films effect us repetitively, passing their effects from one generation to another, from one culture to another, almost genetically. such repetition constitutes a kind of reinforcement of cultural values, whatever those values may be. some are good and some are not. and we should be careful here to recognize that such filmic influences are not the same for everyone, not the same for all viewers. but whatever reception they receive, they are compounded by the fact of the repetition, no matter how modulated by personal or cultural differences. histories of cultural values are deeply tied to them. but the inverse is also true; their content both consciously and unconsciously reflects the historical moment in which each episode is released. this is what makes serials interesting; they are to some degree not only indexes of specific historical and cultural moments, but can, again to some degree, index the changes from one period to another.

in addition to the reciprocal influences of filmic blockbuster spectacles and their specific reflections of history, the comparative impacts of one film to another, of a group of films to each other, needs also to be considered. clearly, the popular imagination can’t help itself from comparing, both positively and negatively, batman to superman to wolverine to hulk, and the like. so groups of films also reciprocally influence each other and their audiences. this is a second level of reinforcement. a third level arises from the ways in which film writers and directors mine other films, from other cultures and times, for their structures and contents. Star Wars I is modeled on Kurosawa’s Hidden Fortress, for example.

though it would be a very complicated task, it would be possible to map the system of such influences to determine what might be called the overall gestalt effects of specific components of a given film matrix. my previous entry did a bit of that through my comparison of Neo and Hulk to their real-world analogues, Bush and Schwarzenegger. i want to develop this analysis further by focusing on a particular matrix of influences that revolves around Schwarzenegger.

Recall , as a concept, took on a very different meaning in cultural life since Philip K. Dick’s inspired science fiction film, Total Recall, added a new effect to the already flickering border between the fictive and the real, and morphed into California’s 2003 special gubernatorial election dubbed the ‘Davis Recall.’ That was the moment when then Governor Davis was challenged in the middle of his term, by Arnold Schwarzenegger, and lost. He was ‘recalled’ in the sense that he was forced to abdicate the governorship. Both of these events, the film and the political challenge, featured the crosscutting change-agent, Schwarzenegger. It would be mistaken to treat these alliances as accidental and of no socio-political interest.[1] The key question is: Just what form of governmentality emerges from this spectacular re-interpolation?

This transition opens and demarks a new historical moment in the re-calling forth of political subjection, perhaps the launch of a sequel to the persistent neo-con, thirty year campaign, but certainly, a new phase of the spectacle as it sutures the real and the fictive in inverse “filmic” form – not the reality of the screen, but, the screen of reality. The theme as announced by Schwarzenegger himself: “The democrats must go.” – as if they hadn’t already defected from even the libertarian liberalism that has constituted their illusory shred of difference, parlaying their own deal making skills to occupy (and benefit from) the first phase of the double-double cross as the “lesser of evils” decoy. (More on this in a following post.)

The analysis must take a genealogical path: the Schwarzenegger recall is of second order, itself a recall of another, equivalent neoconservative moment. Reagan had already played the role as two-bit thug who masterminded the double double-cross in the Killers (1964), establishing the precedent for Schwarzenegger’s supercession. This sequel structure reveals governmentality in Hegelian terms – philosophically, the double double-cross is the negation of negation, and is a strategy the neo-cons have learned to use with consummate skill. A two-bit, automaton superhero now performs his own version of the double double-cross – in trumping Davis he trumped Kennedy (again), manifest as, and consummated by, the politically symbolic matrimonial kiss assertively proffered by Maria Schriver during Terminator’s cum Governator’s televised acceptance speech. With the Kennedy and Schriver families carefully arranged at ringside, the signal is this: the alliance hierarchy has shifted and the kiss is the sign of capitulation of the liberals to the conservatives.

[1] “Social movements are several symbolic revolutions behind their opponents, who use media consultants, public relations consultants and so on.” Pierre Bourdieu, “Social Scientists, Economic Science, and Social Movements,” in Acts of Resistance: Against the Tyranny of the Market, 1998, p. 53.)