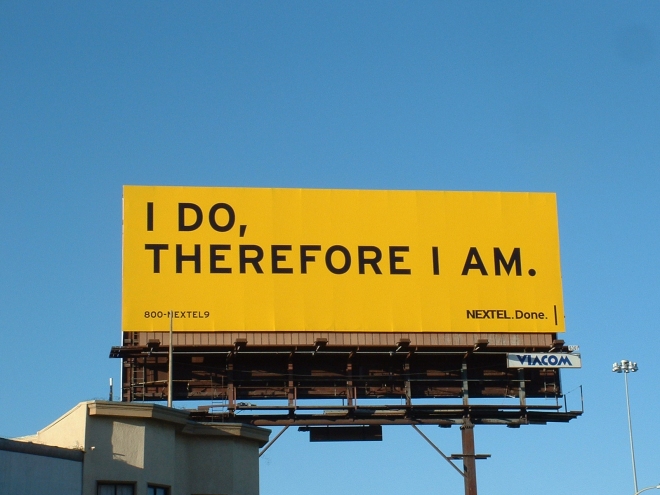 as a first post, i will return to a ‘philosophical encounter’ i had a number of years ago.

i photographed this billboard as it hovered over the highway that leads to the bay bridge, in san francisco, california. so literally millions saw it during the several months its crass, imageless image sought to cut through the barrage of media glut, by denying the standard visual strategies of advertising, as though it were a text or twitter message, and therefore a personal message to ‘you’. the hideous architecture of the financial district was directly behind it, so the sign was essentially a message sent from there. It is really quite an ominous one, both a warming and a threat. though it’s no longer there, its extraordinary message still announces the main message of neoliberalism today – “i” have the power. it’s extraordinary because corporate capital typically masks its real agenda, while here it’s unconscious diktat is writ large as a barbarization of one of the most famous of philosophical statements – i think therefore i am. for thought, action is substituted – “i do”.  it is only action, this message implies, thoughtless action, that brings being (i am) into existence. but the phrase, ‘i do’, also suggests the promise of matrimony (‘i do take you as my lawfully wedded consumer’), and we are now bound by economic law. and further, common sense is the target of this message as it intends to subvert the adage: think before you act. but the message it transmits is also an integration of descartes statement and nextel’s reinterpretation, but also the annihilation of the difference between two forms of subjectivity – the corporate ‘i’ of action and the cartesian ‘i of rational thought. this perversion of cartesianism in an announcement of an accomplished fact – written in the imperative voice it has the authority of  incontrovertible fact, and is an ‘order.’ do as i say, and put yours in now, or else. its message recalls social darwinism’s entitlement to dominate because those who collectively send it are clearly the strongest – that they rule, and that we must obey, is a perfect and indisputable logical global consequences of their power, is as clear and distinct a thought as descartes demanded, a rational and scientific fact. the message is a complete negation of identity, of freedom and rights for the individual, period. ‘i do because i can’ is a bald corporate-imperial pronouncement, an educational rescript if you will, and asserts the symmetrical corollary to, ‘don’t think, act’ – that is, you can’t either think or act because your are powerless to ‘do’ anything, and implying that therefore you don’t exist. which is in fact true in the sense that the great majority don’t exists as anything other than a spreadsheet entry that pay taxes directly into the pockets of the corporate wealthy.

that is fact, and nextel has made this loud and clear. it’s a done deal – buy nextel.done. so i begin to make a case against capital’s barbarity. to bring evidence of that, against it, for those willing to consider not just the evidence, but far more importantly, to bring summary judgment against it.